Turning a Tragedy into a Teachable Moment

Recently, Naya Rivera, an actress from television, went missing while boating with her four year old son. This tragedy ended with Naya Rivera being declared dead but her son being safe. The tragic results along with the way the situation was handled by the press can easily be turned into a teachable moment.

The child was discovered sleeping in a boat by himself and she was missing. According to the press conference following the tragedy, it's believed that the currents pushed the boat away from them and that Naya used her last energy to get her son back in the boat safely. Her last act was to save her son's life. So valuable lesson number one is about the love a mother has for her child.

The second valuable lesson revolves around how the news handled the story. The image attached to this post has three screenshots of Tweets. One from an entertainment site, one from a news site, and the last from the official police department's social media team. All three screenshots were taken within seconds of each other so we can say the retweets and likes are from the same time.

Seven minutes after the police announced they found a body and would be holding a press conference at 2, the entertainment site posted a claim that it was Naya Rivera's body that was found. A real news site posted 20 minutes that a body was found and a press conference would be held. While the real news site used an image of the late actress, they never claimed the body was her.

This tragedy can be turned into a positive by helping to teach about reliable sources and helping students learn how to determine truth vs click bait. Looking at the screenshots, it's interesting to point out to students that the entertainment site had more retweets than the legit news site or the police department combined. The entertainment site was also used as the source for many other entertainment sites such as radio stations. 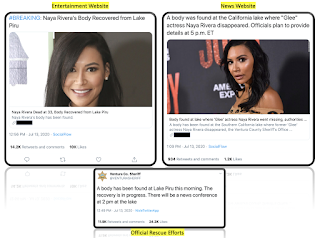 This blog post was posted after the press conference. I have purposely waited a few weeks out of respect to everyone involved. While I believe this example can be used as a teachable moment, I also understand this is a difficult time for the family and friends of this talented actress.
Posted by Cori at 2:49 PM