Sponsorship Offer to Present at ISTE 2015 in Philadelphia

A few months ago, I received an email from a representative of Class Dojo which asked if I would be interested in presenting at ISTE and included a short survey to complete. I immediately responded and was thrilled when a few days later I received an email response. Since I have never presented at a conference as large as ISTE, I had stated that I would be willing to present alone or with a group. Following a few emails with the Class Dojo representative, I was put in contact with a fellow educator in Philadelphia who was also interested in presenting on the topic of parent involvement.

A week later, we met at Starbucks and discussed how we would want to present. My new partner was a school psychologist so we actually played off each other nicely. He will talk about the psychological benefits of positive communication and I will demonstrate how to use different types of technology and websites to make that communication efficient for all involved. After a few hours and many refills, we had a basic idea of what we wanted to present. We emailed back and forth a few more times with both Class Dojo and ISTE before submitting our proposal.

Unfortunately we were not selected to present at ISTE. Just being sponsored does not guarantee a spot within the conference but it was exciting to know that I have begun building up enough of a reputation to even be asked. Class Dojo is still considering a sponsorship for my attendance at ISTE, however it will not be a full sponsorship so I will be looking to find a way to fund the rest of my admission.

If you have not used Class Dojo with your classroom, I recommend checking it out. The website has been around for a few years now but they are still improving all the time. They listen to teacher feedback and make changes based on popular requests. If you teach elementary or middle school, your students might enjoy the personalized monsters they can create. High school teachers? If you think the avatars are too "babyish" for your students, you can import actual photos of your students.

Class Dojo also allows your parents to connect and allows for easy communication. Parents can sign up for accounts which allow them to monitor their students. Many of my parents have loved it. I'll admit that some days I'm more consistent with my points than others, but it really helps with tracking behaviors in the classroom.

Within minutes of receiving my acceptance letter in October, the Austin 2014 cohort of the Google Teacher Academy (GTA) immediately became a close knit family of educators with a common goal. We talked technology, lesson ideas, successes and failures. We talked about school and random topics. By the time my plane landed in Texas, I felt like I already knew my cohort of 52 educators from around the country. I knew their voices from Voxer, their faces from G+ profiles, and their personalities from Hangouts.

After four days in Austin Texas, I feel rejuvenated in my career as an educator. The actual GTA was only a two day program but our group added a few extra activities. Monday night, a large group of future Google Certified Teachers (GCT) went out for dinner at a local restaurant that shared its parking lot with our hotels. This restaurant was selected because of its location, but we had a great time as we all got to finally meet each other face to face. The following morning, many of us met for breakfast before walking over to the Google offices.

The buildings lobby looked like a normal office, but once on the elevator we were transported to the magical world of Google. Tight security required us to always have an escort because without an employee badge, the elevator automatically returns to the first floor. As we walked off the elevators on the fourth floor, we were greeted by our lead learners, a cool title for past GCTs that now act as mentors, and Google staff. A few signatures later, we had our name tags and were touring the conference room that would be our home base for the two days and the attached break room.

I was shocked when the first thing we were told was to put our computers away. Our first lead teacher began by talking to us about what we don't know. He proceeded to show a video tutorial about tying shoes and passed out a ton of shoes to practice. Did you know you can tie your shoelace in one quick motion? Neither did I but it was a great introduction to the way we would be learning and thinking.

From tying shoes we started moving very quickly. The morning was spent using post-it notes to organize our "problems" in the classroom. After moving, categorizing, moving again, and narrowing it down, we each selected one problem to focus on. My personal choice was to think about why students feel disconnected in the classroom. After moving around the room to work with teachers that had similar problems selected, I was working with a group of eight teachers that all wanted to focus on student engagement.

Later, we split into groups based on the color of our name tags and rotated through smaller workshops each with a different theme. In these workshops we discussed different uses of the Google tools for the classroom. I got tons of cool tricks that I didn't know about before and learned about a few Google tools that are useful but lesser known. For example, did you know you can compare the use of keywords in books written to recognize patterns? Star Wars and Computer Science have a pretty cool relationship. These relationships can spark some interesting discussions in class.

Day two continued the smaller workshops but also included some full cohort activities. The Amazing Race was a great competition which I hope to recreate for my students. The basic idea was that you create a scavenger hunt using Google Maps and associate a challenge to complete which each fact. We had a lot of fun, but I did feel bad for waking my friend up for the Hangout challenge. Turns out that he had taken a sick day because he wasn't feeling well.

As the second day wound down, we continued working on our big problem and began to come up with a way to solve that problem within our communities. I choose to try and begin a 20% plan, sometimes referred to as a genius hour, for my students. I'm going to begin by having my students think about passion. They will then take their passions and create a personalized project. My hope is that by encouraging students to pursue topics they choose, they will become more interested in the learning process.

The two days at GTA went very quick and I was sad when it ended. Speaking with other teachers in my cohort helped me to see that things I thought were problems, really weren't the end of the world. I also saw that every situation has its issues. Some schools have the issue were students don't care about their grades but other schools have the issue where students care too much about their grades. Either way learning is not happening in an authentic way. As I continue to speak with my cohort, I have brought the lessons from GTA back to my school and community. I am looking forward to what the future brings and I am honored to hold the title Google Certified Teacher. 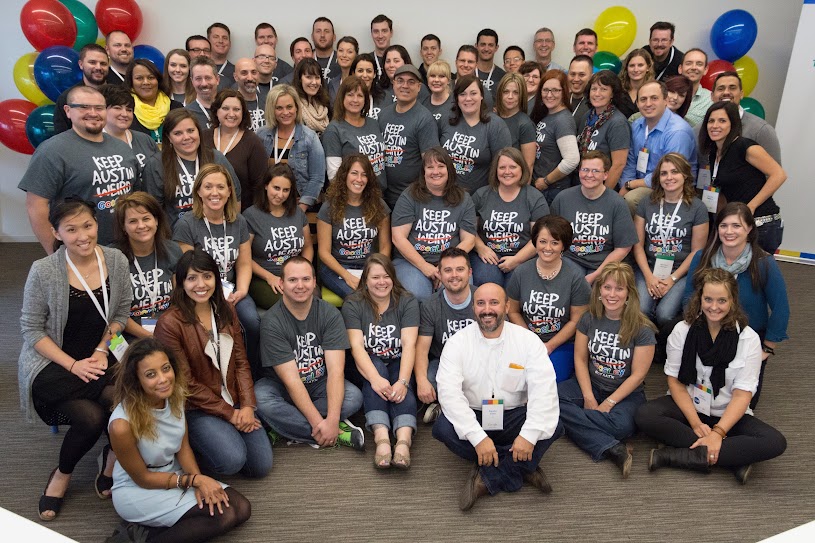